The worst birthday in the life of Peyvand Sadeghian? When she turned 11 during an extended stay in Iran.

“My family tried to make it fun, but it didn’t really work,” says the actor, director and performer.

When she was 10, Sadeghian’s father took her to Iran to visit his extended family, from whom he was separated when he fled the Islamic revolution at the age of 17.

Arriving in the UK as a minor, Sadeghian’s father had settled down and started a family, eventually obtaining British citizenship for her and her sister.

One day, Sadeghian’s father decided to take him to meet his family in Iran.

Despite her father’s obvious discomfort telling her she should wear a headscarf when they arrived, Sadeghian was thrilled to see her family’s home country and meet her grandparents.

“I had never been abroad. I was just excited to be on a plane…I was excited about all the amazing food,” she says. “I didn’t really have a sense of the seriousness of it.”

Stranded in Iran as a dual national

A new reality set in as she left her flight, as bloodline nationality laws in Iran did not recognize her British naturalization.

Sadeghian was forced to obtain a new Iranian passport and a new name, Parisa.

“Nobody was talking to me or being honest with me,” she adds. “I was hearing conversations and trying to piece together what was going on.”

For more than a year, she was stuck in an effectively foreign country. Her father was arrested and the British government ignored his case.

Throughout her stay in Iran, Sadeghian had packed her bags, ready to leave at a moment’s notice.

Refugee: discovering a part of myself

Sadeghian eventually returned to the UK, but it wasn’t until she was 18 that Sadeghian really understood the implications of what had happened, or the underlying causes.

Now in her twenties, she looks back on her time there with a mixture of confusion and bewilderment, a child in an adult world, where even adults were crippled by the Iranian state.

“It wasn’t until I got my own passport that I looked at these papers saying I was a refugee, saying I didn’t have the right to work even though I was a child, and that I saw the naturalization papers,” she said.

“It was a very strange experience to discover a part of yourself that you weren’t aware of.”

This realization that scraps of paper and the powerful interstate relationships they represent can shape a life has fueled Sadeghian’s work.

Now a rising star, how does this story affect Sadeghian’s acting career?

What it means to be both British and Iranian

“Dual,” his 2020 theatrical show, soon to be revived and back on the road, tells the story of his time in Iran and the effects it had on the rest of his life.

This left him with a lasting distaste for the fate of individuals dictated by geopolitics.

“You are at the mercy of all the relationships that are maintained at the top, I find that quite disgusting,” she says.

‘Dual’ was followed by many immigrants and refugees, opening up conversations about the difficulties of obtaining established status and being mired in bureaucracy.

Sadeghian’s distinctive voice is something of a reaction to the silence surrounding her childhood experiences, and the irony of making art about an oppressive regime under which she could never be so expressive is not lost for her.

“I was really touched, it’s a conversation that people don’t really have the opportunity to have with each other,” she adds.

Sadeghian uses many methods to communicate his vision, which is usually well documented from conversations, academic papers, and books before he started creating.

“I really am an all-around creator. I gather that material and then I rework from that in terms of form,” she says.

Over a career in which she has faced the barriers of being mixed-race and working-class, Sadeghian has acquired an impressive arsenal of skills she can use to engage audiences with complex ideas.

His work often has a multimedia bent, involving puppets or mediums to represent social media.

In a collaborative project titled “Rich Kids: A History of Shopping Malls in Tehran,” Sadeghian took to Instagram on stage to show the “rabbit holes” people can go down in the private world of their phones. ‘

Dual’ even included voice notes from his father, who now lives in China.

“I think he’s happy that I’m working on this, but it was also pretty hard for him to talk about it without fuming and raving,” she adds.

Netflix, Amazon Prime and beyond

After years of struggling with the financial burden of an early acting career, Sadeghian found her place on screen in shows that would soon make her a familiar face.

His upcoming projects include a part in a ‘Bridgerton’ spin-off on Netflix that tells the origin story of iconic motorwoman Queen Charlotte, while Sadeghian is also a cast member in from Amazon Prime adaptation of the hit feminist allegory “The Power”.

However, despite quickly gaining widespread fame, the actor is refreshing, which is perhaps why his work is so relevant.

“There are things creeping in the UK and it’s really important to be aware of that and not constantly pat yourself on the back,” Sadeghian says.

But even as his star rises, the creative spirit can never quite let go of his childhood in Iran.

“I often think that if I didn’t leave, what would this version of life be like? ” she says. 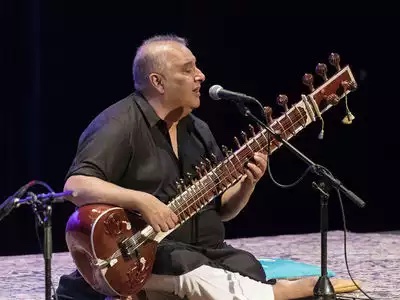